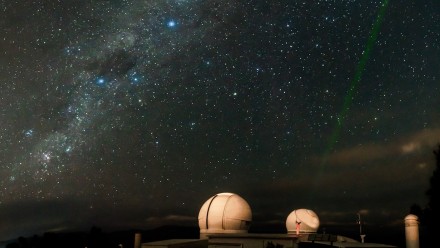 The RSAA Adopt-a-Star program successfully concluded on 31 July 2006. However, we will continue to maintain the list of adopted stars on our website.

For 9 years this program provided the public with memorable "gifts with a difference", tying sponsors names to stars that they "adopted" on the Stromlo Visitor Centre database. It also provided a source of income for the upkeep of the centre and its exhibits.

The program commenced in late 1997 and was operated over the years by Cas Margules, Kim Rawlings, Natalie Aked, and Fay Neil. Around 8000 stars were adopted, all of the ones visible to the naked eye from the southern hemisphere and many that are faint enough to need binoculars to find them.

With the lack of bright stars and the growing popularity of similar schemes run by other observatories, the decision was made to terminate the program in 2006.

If you are considering "puchasing" a star, you should read the fact-sheet at the Australian Astronomy web site.

Similar programs operating within Australia are:

Mount Stromlo Observatory would like to thank everyone who participated in the Stromlo Adopt-a-Star program for helping to raise funds for both our science education program and for the redevelopment of exhibits in the Observatory Visitor Centre.

Find an adopted star by clicking its constellation name below. The stars are listed with their brightness category and the name of the person who has adopted the star.

It is possible that there are names that were not added to this list: we lost many of our records and backup disks, particularly from before 2002, in the fires of January 2003. If you adopted a star years ago, please check that it is still there and let us know if it is among the missing so that we can update the list.