» Research » Research stories » WiFeS and the fine art of spectroscopy

WiFeS and the fine art of spectroscopy

Much of astronomy is about understanding light. In the early days it was about interpreting the visual (light) images captured by telescopes. However, as our technology enabled us to measure the various properties of the light itself it was realized that these properties could provide us with valuable information on many of the things that make up our universe.

The light emitted by galaxies and other astronomical objects is composed of electromagnetic radiation with a range of different energies. This energy content depends on how the radiation was produced and also on the medium that it travelled through before it was measured.

We observe different energies in the spectrum of visible light (light that can be seen by the human eye) as different colours: red light has relatively less energy than the blue colours at the high-energy end of the visible spectrum. The energy of light or radiation also corresponds to the wavelength or frequency of the light.

Measuring the intensity of the detected light at different parts of the energy spectrum can tell us all sorts of useful information about the source of that light. That includes what the source is made of and how it’s moving relative to us. This method of analysing radiation is called spectroscopy, and the process of splitting light up by energy, into the spectrum of energies, is known as ‘dispersing’ the light.

Light dispersion sounds technical but it’s something we witness every time we see a rainbow. Rainbows are formed when light passes through droplets of water in the air, or by a glass prism. These show a spectrum of the light from the sun that has reached the earth, where passing through the prism or droplet causes the parts of the light with different energies to be bent by a different amount, according to energy, so that they travel through in slightly different directions and land in different places on the ground, forming the rainbow.

A spectrograph is an instrument that separates light into the spectrum of energy that it contains and records the intensity (or amount of light) that is detected at different energies. They tell you the structure of the energy that makes up the light.

Most spectrographs use more sophisticated components than a simple prism, but the result is similar, and the intensity of the light in each region of energy (or colour) can then be recorded. The design of the spectrograph determines the actual energies of light that can be measured, how wide a range of energy is measured and how finely that range is sampled (the spectral resolution).

When the light from a galaxy or star is highly dispersed by a spectrograph – forming a high-resolution spectrum – there are a number of features in the rise and fall of intensity at different energies that reveal different properties of the light source. The presence of the sharp peaks and troughs at particular energies can indicate that particular types of atoms that produced some of the light, or were present in the clouds of gas that it travelled through. The position of these peaks can also be used to measure the speed of the emitting particles relative to the observer.

One of the drawbacks of spectroscopy in astronomy relates to how spectra are detected and dispersed by traditional spectrographs. Because the information about the energy content of the light is being recorded in one direction on the detector, there is only one axis available for spatial information. In other words, each spectrum (e.g., across one row) is obtained from one position on the sky. The simplest way to form the spectrum then, is to take the light from a thin slice of sky and spread it out to form the spectra across the detector. This provides information from only a narrow slice of the target in each observation.

Many observations would be needed to step the slit across a galaxy (for example) and build up a set of data for the whole galaxy. Observing time using big, powerful telescopes is difficult to obtain, not to mention expensive, so this kind of process is rarely done, and generally astronomers just use the information they can gather from one or only a few observations with the slit in different positions.

To overcome this problem, astronomers now use a type of spectrograph called an integral-field spectrograph (IFS), or 3D spectrograph. This type of instrument can measure the light and produce a spectrum at each point across a continuous 2D image of a galaxy or other celestial target. This is done by dividing up the image that is transmitted from the telescope. Clever configurations of mirrors and lenses are used to rearrange the parts of the image so that the light can be dispersed into a set of spectra and recorded as in a conventional spectrograph. Instead of having spectral information from just a small slice of the galaxy being observed, then, the properties revealed in the dispersed light can be measured across the whole region of a galaxy.

The result is a three-dimensional data product from the IFS. When the data from the instrument is processed and reconstructed, it forms a data cube: it has two normal spatial dimensions of the image of the sky – equivalent to the rows and columns of pixels in a normal image, and a third spectral dimension that shows the intensity of the light at different energies – the energy spectrum. So the astronomer has a spectrum at each spatial position (pixel) over the image of the galaxy, and this provides a clearer picture than just seeing a small slice of their target.

Researchers at Mount Stromlo Observatory have used this approach and taken it even further by creating the Wide-Field Spectrograph or WiFeS. It’s an integral-field spectrograph that can capture light from a wide region of the sky in a single exposure. Of course, the term ‘wide’ is relative. It’s extremely wide compared to what has been possible with more traditional spectrographs but non-astronomers might consider it still quite small – around 3% of the area of the full moon. That is unusually large among IFSs that are currently in operation on telescopes around the world. It’s enough to take in the light from entire galaxies that are hundreds of millions of light years away.

WiFeS detects light in the visible part of the electromagnetic spectrum, but another characteristic that makes it unique amongst these types of instruments is that it is sensitive to a very wide range of energies. It can record light from ultraviolet energies, with slightly higher energies than the most blue light that we can see, to the most red, lowest-energy part of the visible spectrum. This is possible because the instrument has two cameras, one that is designed to detect the lower range of energies in the spectrum and another that is optimised to record the highest energy region of the visible spectrum.

There are a number of methods employed in different IFS instruments to divide up the field of view and rearrange the light to be dispersed, but WiFeS uses a special mirror called an ‘image-slicing mirror’. This mirror is made up of a series of strips or slices of glass that are fanned out around a central point so that the reflections from each strip of the image are all slightly offset from each other. Each is directed to a different lens that prepares that part of the image to be dispersed as a spectrum and recorded on a different part of the detector. When the data is analysed, we have to reconstruct the image of the sky and align all the spectra that are measured correctly, to form the 3D data cube.

WiFeS is now the principal spectrograph on the 2.3m telescope at the Siding Springs Observatory. It is being used for a wide range of research work by astronomers at the ANU and their collaborators around Australia and overseas. It is used by the majority of the astronomers who use the 2.3m telescope. In addition, the telescope and instrument can now be operated entirely remotely over the internet, so that astronomers can use them from the ANU in Canberra, without even travelling to the observatory.

WiFeS is proving critical to our studies of the motion and composition of structures in galaxies, and this is helping astronomers understand how galaxies form and grow. But this amazing instrument is shedding light on a broad range of other areas as well. These include: 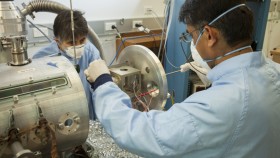 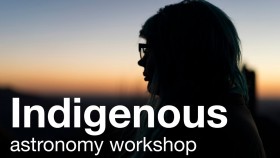