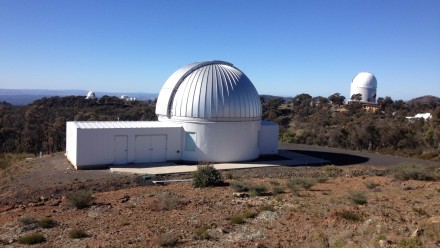 The Korea Microlensing Telescope Network (KMTNet) consists of three telescopes, one at SAAO, one at CTIO, and one here at SSO. These telescopes provide 24-hour continuous monitoring of the Galactic bulge. The KMTNet aims primarily to discover extrasolar planets based on the analyses of gravitational microlensing phenomena, especially the detection of earth-mass planets in the habitable zone of their parent star.

The KMTNet system is also very suitable for wide-field photometric survey sciences that study supernovae, asteroids and external galaxies, for instance. Because the observation period of the Galactic bulge focuses on the primary science on extrasolar planets, the other science programs are performed in the season when the Galactic bulge is not observable.