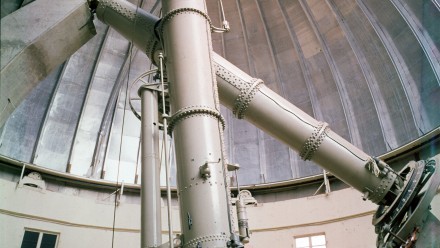 At the invitation of Director Richard van Der Reit Woolley, the telescope moved to Mount Stromlo in 1952 and recommenced operation in 1956. Operating as a foreign station, Yale and Columbia astronomers investigated the distances and movements of southern stars by measuring their parallax (angular movement) over six month intervals.

After Yale and Columbia donated the telescope to Mount Stromlo in 1963, the refractor assisted the planning of NASA’s Voyager missions to the outer planets by taking photographs of the moons of Jupiter and Saturn. From 1977 to 1992, the telescope was used by the University of Virginia to extend its parallax program to the Southern Hemisphere.

The scarred shell of the Yale-Columbia dome is now an evocative reminder of the ferocity of the 2003 firestorm.