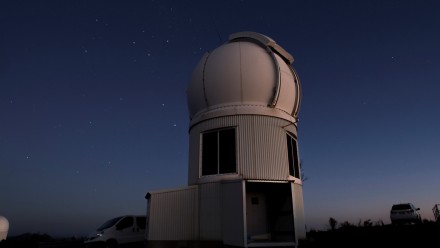 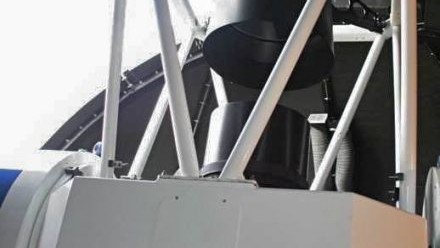 SkyMapper is a state-of-the-art automated wide-field survey telescope that represents a new vehicle for scientific discovery. It is sited under the dark skies of Siding Spring Observatory near Coonabarabran, in central NSW. SkyMapper's mission is to robotically create the first comprehensive digital survey of the entire southern sky. The result will be a massively detailed record of more than a billion stars and galaxies, to a sensitivity one million times fainter than the human eye can see. The survey's data set will be made freely available to the scientific and general community via the internet.

SkyMapper will image each part of the sky 36 times, it will identify changes occurring within the Universe that would otherwise pass unnoticed. This will enable astronomers to identify targets of special interest and should greatly assist in tasks such as discovering large dwarf planets like Pluto in the outer solar system, and tracking asteroids.

The volume and quality of SkyMapper data will also enable astronomers to:

In addition, it will help us locate stars and galaxies for future investigation using the next generation of extremely large optical telescopes like the Giant Magellan Telescope, and state of the art radio astronomy facilities such as the Australian Square Kilometre Array Pathfinder (ASKAP) and, looking further ahead, the Square Kilometre Array.

During the five-year Southern Sky Survey, SkyMapper will generate 100 megabytes of data per second during every clear night. This will amount to about 500 terabytes of data (equivalent to 100,000 DVDs) at the end of the survey. A distilled version of the survey data will be made publicly available and will include a set of images of all the stars, galaxies, and nebulae, as well as a database containing the accurate colour, position, brightness, variability, and shape of every one of the billions of objects in the southern sky.

The SkyMapper Southern Sky Survey is running from 2014 to 2019. After an initial round of quality control is performed by the SkyMapper team, the images and catalogs will become available to Australian astronomers. Following a proprietary period of 12-18 months, the data will become fully accessible by the public via the All-Sky Virtual Observatory.

During the operation of the SkyMapper Southern Sky Survey, 5% of the overall observing time will be made available to Australian astronomers through regular Calls for Proposals. A further 20% will be available to astronomers within ANU. Submitted proposals will be evaluated by the RSAA Time Allocation Committee.

The SkyMapper telescope was constructed by EOS Australia. It has a modified cassegrain design, featuring:

All transmissive optics are made of fused silica to ensure optimal UV throughput.

The telescope's advanced 1.35 metre modified Cassegrain optics have an f4.79 focal ratio, making the system highly efficient as a survey instrument. At the heart of the telescope is a unique digital camera designed and constructed in house by ANU technicians. The A$2.5 million camera uses 268 million pixels to capture a region of sky 40 times larger than the full moon every 20 seconds. As well as recording the brightness and shape of objects, a unique series of filters provides astronomers information about their age, mass and temperature.