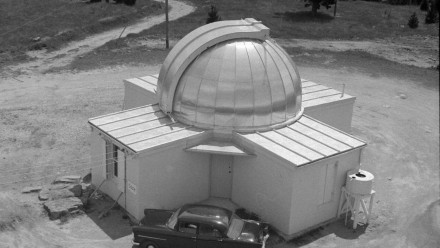 The Oddie Telescope was donated to the Commonwealth in 1909, and established at Stromlo in 1911. The Oddie Dome was the first building on Mount Stromlo, and the first Commonwealth building in Canberra.

The 9-inch Oddie Refractor telescope was initially used to test the suitability of the site as an Observatory. Astronomers used the telescope to measure the orbits of binary stars; search for remnants of supernovae in the Milky Way; and take spectra of southern stars, gathering information on their age, size and chemical composition.

Restored in the 1990s, the Oddie also served as the Observatory’s premier public outreach telescope.

It was destroyed in the 2003 firestorm, but in 2011 was faithfully recreated for the 100th anniversary of its arrival on site.

You can find out more about the history of the Oddie here.