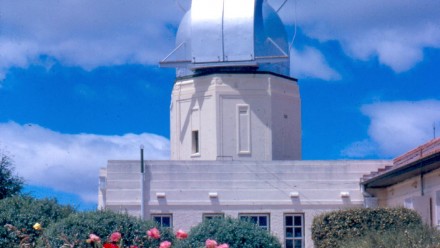 Mount Stromlo was originally established as a Solar Observatory, and when the Heliostat (or Sun Telescope) was completed in 1931 it became the site’s primary research instrument.

The Heliostat used two flat mirrors to track the Sun and pass its light down the tower through a 12-inch lens. The light beam could then be reflected into a camera or a 3-prism spectrograph. The spectrograph was used by Clabon (Cla) Allen to produce an Atlas of the Solar Spectrum – an important reference to solar researchers for many years.

The Heliostat was also used to monitor the effect that solar flares and sunspots had on the Earth. Photographs were taken daily of the sunspots, but these archives were all lost in the 2003 bushfires.

Following the Second World War, the Observatory had a shift in focus towards stellar astronomy and the Heliostat fell into disuse, with its last observations taken in 1957.

While the original Heliostat was destroyed in the 2003 firestorm, a similar Heliostat now resides in the Visitor Centre.