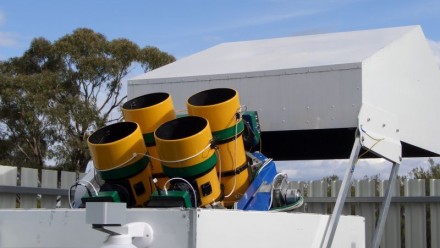 HAT-South is a project to search for transiting extrasolar planets in the Southern Hemisphere. It uses a network of wide-field telescopes to monitor hundreds of thousands of bright stars, searching for the characteristic dip in light that occurs when a planet passes in front of its host star. With follow-up observations, the planets discovered in this project will be studied extensively to determine their density, temperature, and even atmospheric composition.

The HAT-South telescopes are located on three sites around the Southern Hemisphere: at Siding Spring Observatory (Australia), Las Campanas Observatory (Chile), and the Hess Site (Namibia). These locations allow fields to be monitored 24 hours per day, which greatly increases the rate at which planets can be discovered.

The HAT-South project is a collaboration between the Australia National University (ANU), Princeton University, the Max Planck Institute for Astronomy (MPIA) and the Pontificia Universidad Catolica de Chile.

The HAT-South telescopes at Siding Spring have been operating since October 2009. View a video-clip spanning 24 hours of the telescopes' activity at SSO on 24 October 2010.