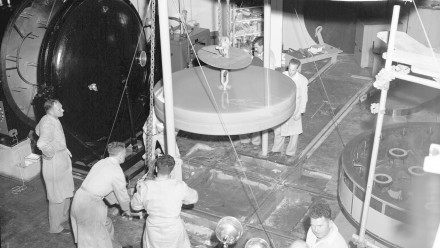 As the site’s largest and most advanced telescope, the 74-inch reflector was the Observatory’s primary research instrument throughout its lifetime. Its completion in 1955 was critical to Mount Stromlo’s shift from solar to stellar astronomy. The telescope was capable of looking deep into space, and contributed to our understanding of the life-cycles of stars and galaxies.

The reflector had three focal arrangements, each of which allowed different astronomical techniques. One of the most powerful high-dispersion spectrographs in the world was permanently mounted on the Coudé focus – an instrument that astronomers could use to separate incoming light into a frequency spectrum. The telescope was also capable of advanced CCD imaging (charge-couple device - the same technology used in digital cameras) to produce high-quality photographs. The 74-inch reflector was so big that it initially required two people to function – one to operate the instrument attached to the focal arrangement, and another to drive the telescope and monitor the weather.

The telescope was destroyed in the 2003 firestorm, but remains in situ.

You can see inside the 74-inch dome on our Virtual Tours page.