A planet going the wrong way

All planets move around their stars in the same direction as the star spins—at least that’s what we thought. But now ANU astronomer Dr Daniel Bayliss and his colleagues have found a planet that breaks the mould.

Dr Bayliss, from the Research School of Astronomy and Astrophysics, is one of 16 early-career scientists unveiling their research to the public at Fresh Science – a national program sponsored by the Australian Government.

Using one of the world’s largest telescopes in Chile, Daniel and his collaborators discovered that a distant planet WASP-17b is moving in the opposite direction to the spin of the star around which it orbits. The discovery throws traditional theories about how planets form around stars into doubt.

Planets form from the same disk of rotating material that gives birth to the star around which they move. So until now it has been assumed that any planets orbiting a star would be moving in the same direction as the star’s spin. This is certainly true in our own Solar System.

WASP-17b is quite different, Dr Bayliss says, and its backwards motion is somewhat of a mystery to scientists.

“It is possible that the planet underwent a close encounter with another giant planet billions of years ago, which altered its orbit so much that it began orbiting backwards,” he said.

It is not known what fraction of planets orbit their stars in this retrograde manner, but astronomers are now actively trying to monitor other distant planets to see how common it is.  If it were common, this would not bode well for the chances of life around other stars.  Close encounters between giant planets would most probably destroy any small Earth-like planet in that system, and wipe out any chance of life arising.

At present, only a handful of distant planets are known, but Dr Bayliss is part of a project, called HAT-South, which is monitoring millions of stars in the southern hemisphere to see if they have orbiting planets. As part of this program, he runs a set of telescopes in Australia, the data from which is combined with those of identical sets of telescopes operated in Chile and Namibia.

This global enterprise should uncover dozens of new planets, providing the necessary information on how common backwards movement is in our Galaxy. 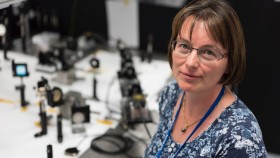 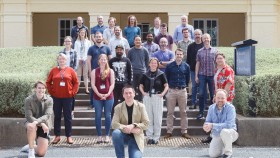