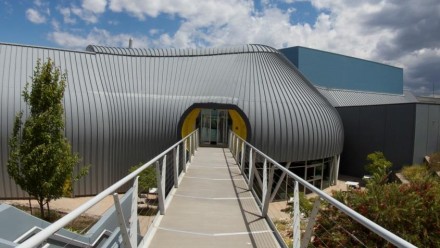 The Advanced Instrumentation and Technology Centre (AITC) is a jewel in the crown of Australia’s space science and technological capacity. Sitting on the top of the Mount Stromlo Observatory just outside of Canberra, the AITC gives Australia the ability to build and test space-ready equipment and satellites.

Stage 1 of the AITC was completed in 2006. It included optics workshops and a huge assembly hall. Since opening it has been used to complete a number of instruments including WiFeS, a wide field spectrograph, for the 2.3m telescope at Siding Spring, and an infrared camera called the Gemini South Adaptive Optics Imager (GSAOI).

Now stage 2 of the AITC has been completed and a suite of new capacities have been added to the cutting-edge facility that will enable it build and test spacecraft. One of these additional facilities is a computer-controlled “shaker” capable of exerting acceleration forces of several tons on various instruments under test. This is vital for anything that is going to be launched into orbit, because scientists have to be confident that it can survive the bumpy ride atop a rocket and still work properly when it arrives in space. It can also be very helpful to be able to test the ability of huge telescope parts to withstand the more gentle but still potentially damaging process of land transport.

Another AITC-2 facility is a 3m diameter, 4m long thermal vacuum chamber that can not only simulate the airless environment of space, but can also heat or cool a test article to realistically test its performance at extreme temperatures, from -170C to +80C. Again this is useful for space projects, but it's also needed to test astronomical instruments and components, many of are operated in a vacuum.

Added to these facilities will be number of clean rooms, workshops and even a large screened chamber capable of blocking out the masses of background radio noise that fills the modern world. This will be particularly useful in assessing the true dark noise in very sensitive detectors that form critical parts of modern telescope instrument packages.

One of the most exciting aspects of this new state of the AITC2 is the way in which it will expand the capabilities of the current facility into areas such as satellite construction and testing. This will create new opportunities for both Australian science and industry to engage more strongly that ever before in the rapidly expanding field of space exploration. You can read more about the projects that are currently going on the AITC on our technology projects pages.

The facility is already being used in the assembly and testing of an Australian satellite that will sample greenhouse gases in the upper atmosphere. It’s also being used to build and test a plasma thruster designed by ANU scientists. If successful, the thruster may become an important means of driving space craft through deep space.

Australia has never had such a technological capacity focussed in a single location. And, when you consider the world-renowned research, innovative space business and science education also currently taking place at the Mount Stromlo Observatory, there’s every reason to believe Australia’s space future is set for takeoff.