The design of the GMTIFS instrument encompasses two key aspects:

GMTIFS is a near-infrared, combined integral-field spectrograph (IFS) and imager with diffraction-limited angular resolution. It will be located on the Gregorian Instrument Platform of the GMT and is fed at f/8 by the direct telescope beam from the adaptive secondary mirror. It accepts a 20.4 mm square science field centred within a 180 mm diameter circular guide field.

An Offner reimaging system is used to relay the 20.4 mm square science field at the telescope focus to an accessible position for the IFS and Imager. A rotating pupil image is formed on the second mirror of this system, which is masked and rotated to act as the cold stop. The long beam run from the third mirror is used to accommodate the atmospheric dispersion corrector (ADC).

The Imager is always available for field acquisition and tip-tilt guiding while the IFS is in use. This is achieved by means of selectable dichroic beam splitters that reflect the chosen science-band wavelengths to the IFS and transmit the off-band wavelengths to the Imager. The Imager can also be used exclusively by deploying a transmissive focus corrector plate in place of the beam splitters. Both instruments operate over the Z,J, H, and K bands (0.94-2.42 µm).

A precision On-Instrument Wave-Front Sensor (OIWFS) Feed is used to select an adaptive-optics guide star from within the guide field and relay its light to the OIWFS. Light from the guide field passes through a field lens into the OIWFS Feed system. A beam-steering mirror located at a pupil image is used to steer the image of a natural guide star to a fixed pick-off mirror located on the back of the science field pick-off mirror. A reimaging system then relays the captured guide-star image to an accessible position at the input to the OIWFS.

The unfolded layout of the optical systems that are housed within the cryostat is shown below. 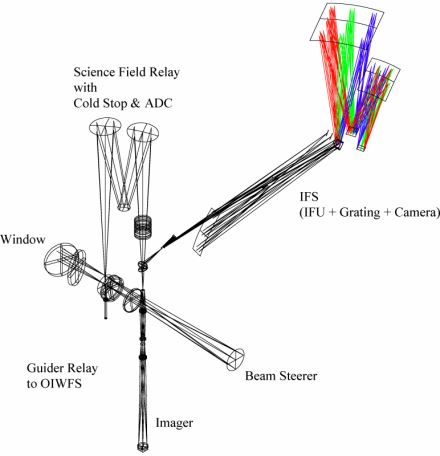 Figure 1 - Isometric view of the unfolded GMTIFS optical systems that are housed within the cryostat.

Light enters the cryostat through the tilted window on the left. The window is immediately followed by a second tilted plate. Both plates are slightly wedged, and together they act to eliminate the aberration that would be caused by a single tilted plate.

The off-axis guide star beam then passes through the doublet field lens near the telescope focus, and progresses through a corrector lens to the beam-steering mirror, where the field lens has formed a pupil image. The beam-steering mirror has a concave spherical surface with its center of curvature close to the telescope focal plane, and so forms a return image of the guide star near the telescope focus. The mirror is tipped and tilted about its vertex to steer this image through a hole in the field lenses. A tilted pick-off mirror mounted from the field lenses then reflects the beam downwards and through a relay. Only the first collimating doublet lens for this is shown in the figure, with the rays being terminated at the pupil image formed below it. The optical system beyond this point is part of the OIWFS.

The pick-off mirror that reflects the guide star beam downwards is double-sided and sized to match the 20.4 mm square science field. It therefore reflects the central science beam upwards where it passes through the Offner science-field relay. The first mirror of this relay forms a pupil image on the second mirror, which is used as the cold stop. The converging beam from the third mirror of the science-field relay then passes through the atmospheric dispersion corrector (ADC).

After atmospheric dispersion correction, the beam passes to a suite of four science-selector dichroic beam splitters that separate the Imager and IFS fields. These define different pass bands for the IFS and supplant IFS filters. Each beam splitter consists of two tilted and slightly wedged plates that correct aberration in the transmitted beam in the same way as the corrected cryostat window. The front face carries the dichroic coating with the reflected beam going to the IFS, and the transmitted beam passing to the Imager.

The science relay delivers an f/8 focus to the IFS at one of four interchangeable rectangular field masks. These are appropriate for the different IFS field scales, ranging in size from 0.28x0.56 arcsec for the finest scale to 2.23x4.46 arcsec for the coarsest, with the step size being a factor of two. Each of these interchangeable field masks is followed immediately by a matching anamorphic projector. The four projectors are geometrically similar, differing only in that their size is proportional to the field size.

A Three-Mirror Anastigmat (TMA) camera is used to relay light from the grating to the detector. The TMA employs three diamond-turned surfaces.

The Imager optics relay the image from the input field mask to the detector with a magnification of 3:1, thereby filling the 4kx4kx15 µm pixel detector with the 20.4 arcsec square science field at a scale of 5 mas pixel-1.

The Imager is a simple refractive system that uses two doublets and a field flattener. A pupil image is formed between the doublets, providing a convenient location for filters. The filter suite is distributed between two wheels placed on either side of the pupil image.

Two supplementary functions are provided by means of three sets of deployable optics.

Figure 2 - GMTIFS positioned on the Instrument Platform within its assigned envelope. 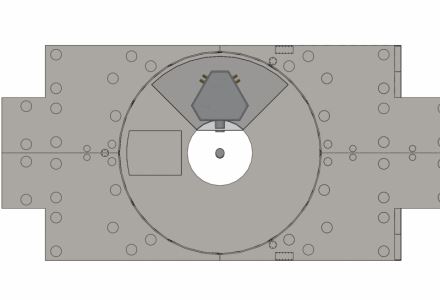 The guide-field light then passes through doublet field lenses, positioned in the central compartment of the CWS, towards the beam-steering mirror that patrols the guide field to acquire natural guide stars. The reflected light is guided through the central hole in the field lens doublet to be folded by the guide field pickoff mirror and reflected towards the On-Instrument Wave-Front Sensor (OIWFS) in the bottom section of the cryostat. 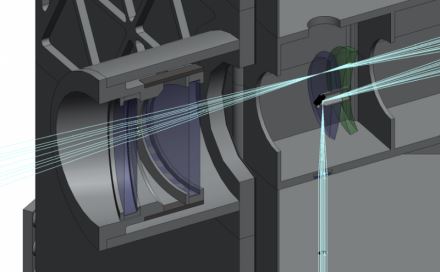 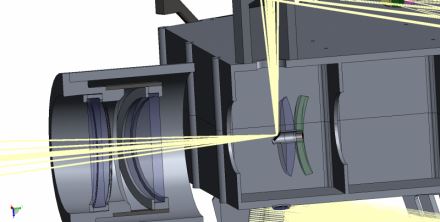 After the first fold mirror, the science beam is sent towards the science-field relay, which consists of three mirrors (M1-M3). The telescope pupil is reimaged at the science field relay M2 mirror, where the rotating cold stop system is located. Following the relay, the science beam passes through the atmospheric dispersion corrector (ADC) lens system. These are grouped in two doublet pair groups, and require two independent rotary mechanisms to fulfill their function.

The last element in the fore-optics system is the science selector in the form of a six-position rotary mechanism. The wheel carries five sets of dichroic/corrector plate doublets that reflect light to the integral-field spectrograph (IFS) and transmit light to the Imager. The sixth wheel position is occupied by a single parallel plate that only transmits light to the Imager (i.e., the Imager only operation mode). 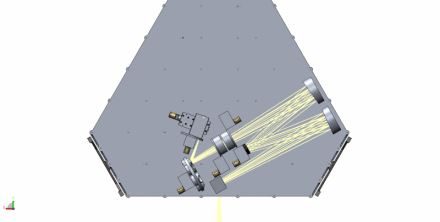 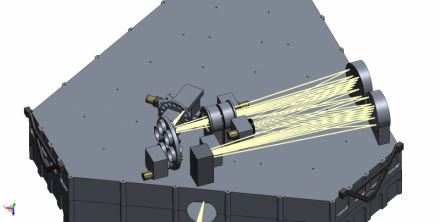 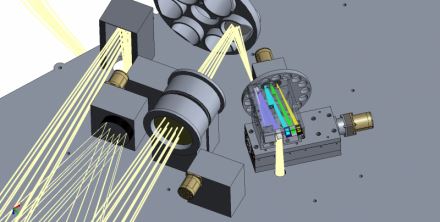 The beam from the anamorphic projector passes through the Cold Work Surface (CWS) to the IFS. It is first reflected by the 2nd IFS fold mirror, which sends the beam parallel to the CWS towards the image slicer. The sliced and fanned field is reflected back to the field and pupil mirror arrays and then further towards the collimator mirror. After the collimator, the beam is fanned by the 3rd fold mirror towards the VPH gratings. The gratings are carried on a tilted wheel that can accommodate up to seven transmissive grating plates up to 100Ã—60 mm in size.

Following the gratings, the formed spectra are passed towards a TMA (three-mirror anastigmat) camera and finally imaged on the IFS detector. The IFS HAWAII-4RG detector package is mounted on a linear mechanism that accommodates necessary focus adjustment.

The science beam enters the Imager optics after being reflected by the Imager fold mirror, which tilts the input beam by 20 degrees. The Imager light passes through the first doublet lens, a dual filter wheel, the 2nd doublet lens, utility wheel, and finally it is recorded by the Imager detector (HAWAII-4RG). The filter wheels have 10 positions each, potentially accommodating 17 filters, in addition to one blocked and two clear positions (one in each wheel). The utility wheel has 4 positions; one clear, two for focus extender/retractor lens doublets, and one for pupil re-imaging lenses. The detector focus stage carries the Imager detector and a field-flattener lens.