One of the most fundamental goals of contemporary astrophysics is to understand how galaxies accumulated their mass over cosmic time and took on the familiar forms of present-day galaxies. Observations of the Hubble Deep Fields have shown that galaxies in the early Universe, beyond redshifts z > 1-2, do not follow the same well-ordered set of morphologies as present-day galaxies. Galaxies at these redshifts are composed largely of multiple luminous knots of star formation, with large knot scalelengths of typically 0.5-1 kpc. Kinematic measurements with integral-field spectrographs reveal the presence of massive rotating disk galaxies at these high redshifts. However, unlike present-day disk galaxies, these so-called chain or clump-cluster galaxies have high gas velocity dispersion that lead to disk instabilities on large scales. The accumulation of mass in galaxies was originally supposed to occur through hierarchical merging of smaller systems. However, it has recently been hypothesized that these high velocity dispersions can be driven by the infall of gas onto the outer parts of nascient gaseous disks via cold accretion flows associated with gas infall along largescale structures in the IGM. The former should lead to flat radial abundance gradients as gas is mixed within galaxies, while the latter should lead to the build-up of steep radial abundance gradients through steady star formation within galaxies. Testing this picture will be a key objective for GMTIFS.

Sensitive high angular resolution observations of z = 1-2 galaxies will be performed with the GMTIFS IFS to probe the dynamical state of massive disk galaxies and the individual star forming clumps within them. Similar measurement of z = 2-3 Lyman Break galaxies will probe the structures of the building blocks from which early disk galaxies probably formed. The 50 mas spaxel-1 scale of the GMTIFS IFS corresponds to ~ 400 pc spaxel-1 at z = 1.4-2.5, so will be able to resolve the clump emission in these galaxies. The large collecting area of GMT will give GMTIFS the sensitivity to perform these observations on galaxies with typical masses, rather than being restricted to only the most extreme examples of early galaxies, as we are with 8-10 m telescopes.

Gravitational lensing offers a means to probe intrinsically less luminous galaxies at high redshift that is already being used with 8-10 m telescopes to probe the redshift range z = 2-3 that GMTIFS will study directly. In the GMT era, the same technique will be used to push to even lower intrinsic luminosities, and to probe the most luminous objects beyond z ~ 4. 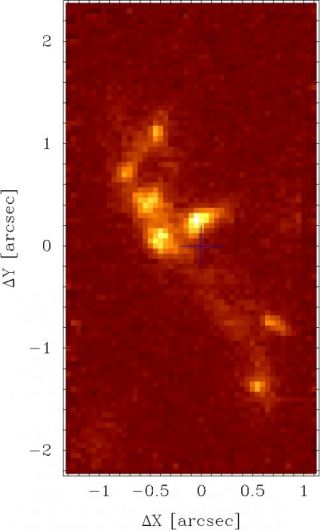 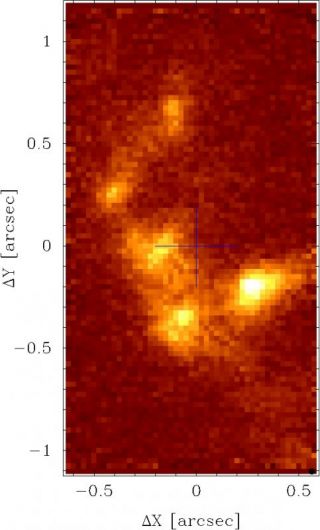 Figure 1 - Integrated H-band emission from a simulated 12 hr observations with the GMTIFS IFS of the z = 1.57 clump-cluster galaxy, UDF 6462. The mJH grating is used with 50 mas spaxels (left) and 25 mas spaxels (right). The latter higher angular resolution observations will be possible on individual emission clumps with the highest surface brightness. 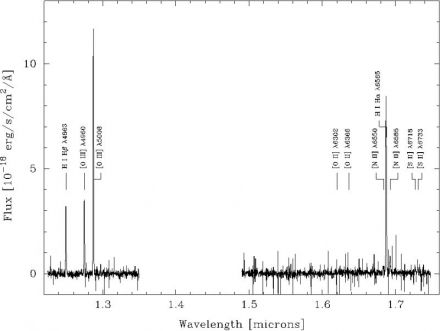 Figure 2 - Simulated integrated spectrum of UDF 6462 obtained by summing GMTIFS IFS data over a 2.0 arcsec diameter circular aperture centered on the galaxy. Prominent rest-frame optical diagnostic emission lines are marked and indicate the utility of wide wavelength coverage at moderate spectral resolution. Much of the apparent noise in the spectrum is due to residuals of strong OH airglow lines. 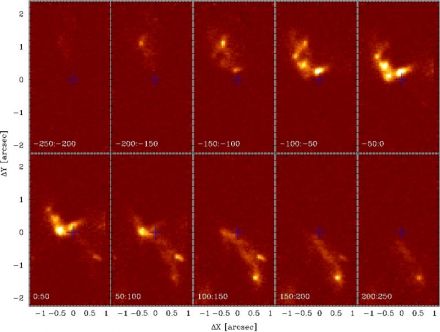 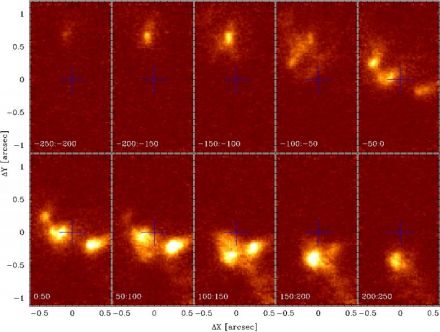 Figure 3 - Velocity slices across the Hα emission line of the simulated UDF 6462 observation with 50 mas spaxels (top) and (bottom). The velocity range is indicated at the lower-left of each panel. The blue cross marks a fiducial position close to the center of the galaxy.