Before most people wake up this Sunday morning, a small space capsule will be dropped off to Earth, landing in Woomera, South Australia. The capsule contains fragments of the surface of a near-Earth-orbit asteroid, Ryugu, collected by the Japanese Aerospace Exploration Agency (JAXA) with the Hayabusa2 spacecraft last year.

The fragments of rock and dust will tell us a lot about how asteroids form, where they have been, what they are made of, and how long Ryugu has been orbiting in close proximity to Earth. 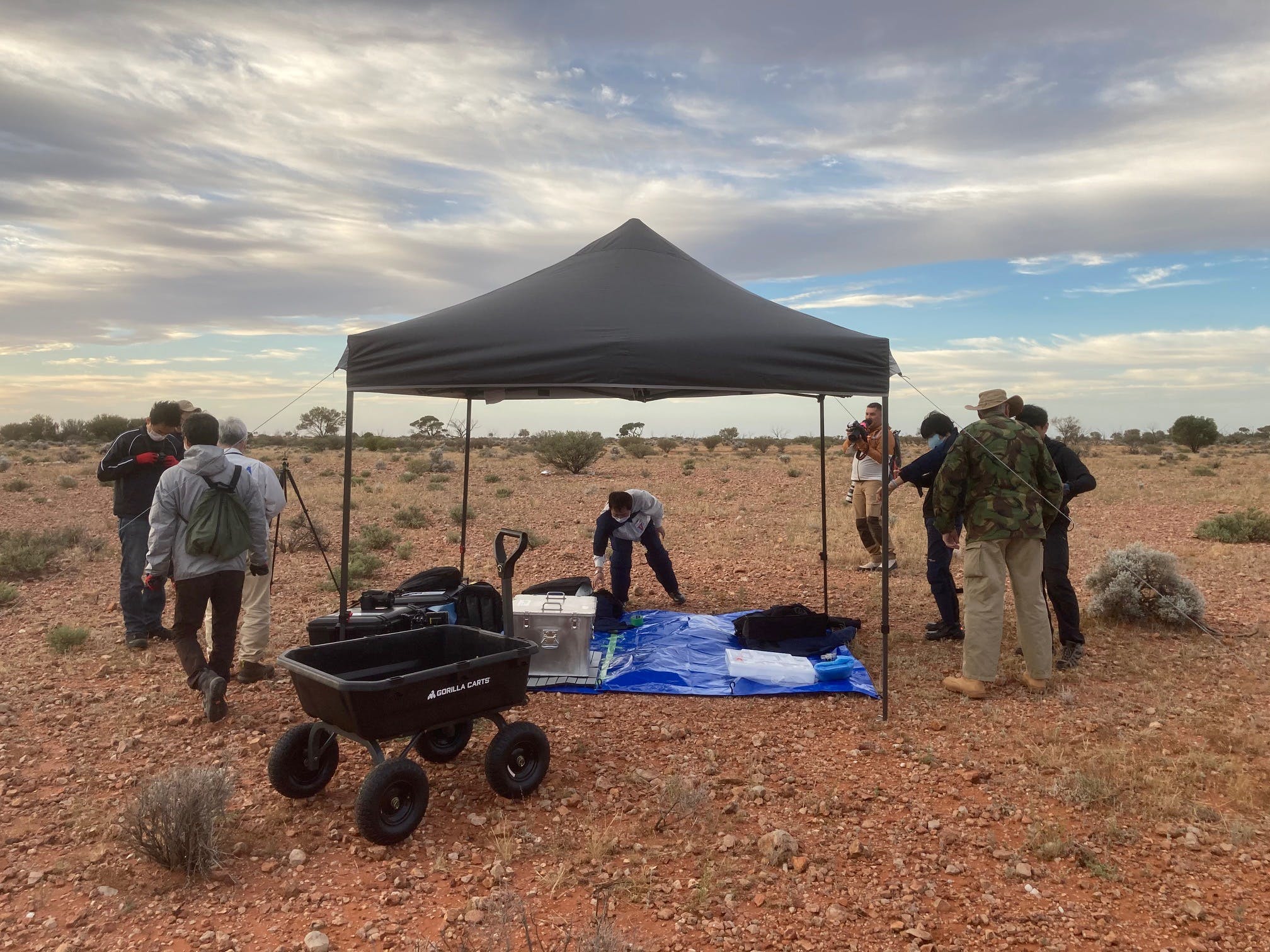 Scientists at Woomera conduct a ‘dress rehearsal’ for finding and collecting the Hayabusa2 sample capsule when it lands. Trevor Ireland, Author provided

Where asteroids come from

Asteroids are rocky bodies that mainly occur in the “asteroid belt” between the orbits of Mars and Jupiter.

Jupiter is the largest planet in our Solar system, and in some ways the bully of our planetary family. The powerful attraction of the gas giant’s gravity stopped a lot of material falling closer to the Sun to build up Mars, and may also have prevented the many rocks of the asteroid belt clumping together to form another planet.

But Jupiter may also have been responsible for redirecting Ryugu, or at least the rocks that formed it, towards Earth. Ryugu appears to be a “rubble pile” asteroid, assembled from the detritus of a planetary collision, that now looks something like a spinning top.

Ryugu may once have inhabited the asteroid belt, but is now a near-Earth asteroid, travelling around the Sun between the orbits of Earth and Mars.

The two kinds of asteroid

Asteroids come in two main flavours. S-type (for “stony”) asteroids are made of ferromagnesian minerals, rich in iron and magnesium, such as olivine and pyroxene. They can be identified by their bright spectrum of reflected infrared light.

The second kind, C-type (for “carbonaceous”) asteroids, are dark objects that reflect little light with no mineral features. This is shown clearly by the twin “headlights” of the Occator crater on Ceres: the spots, likely made by an upwelling of brine, look so bright because Ceres is one of these extremely dark C-type asteroids. 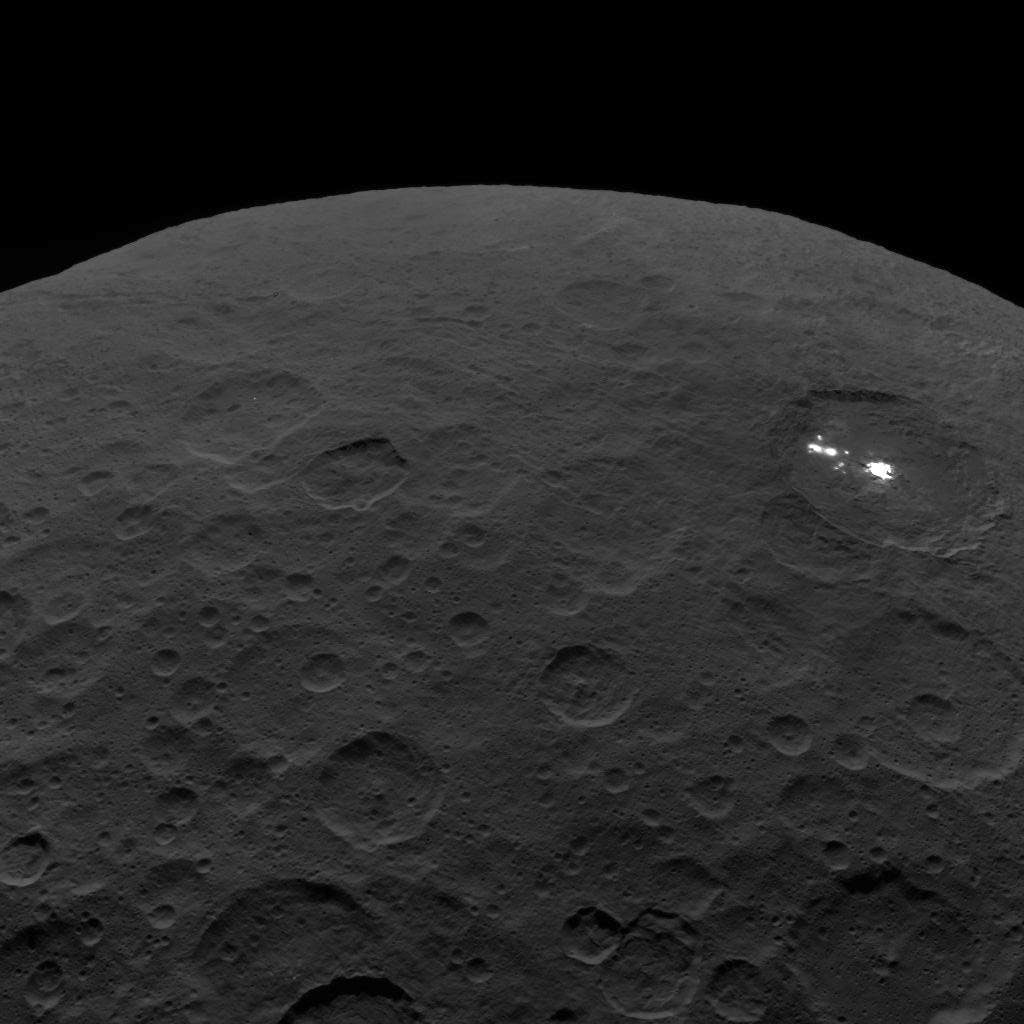 The first Hayabusa mission collected tiny pieces of an S-type asteroid named Itokawa and returned to Woomera in 2010. It was only the fifth ever successful effort to return samples from objects beyond Earth.

That mission collected 1,000 or so particles, which we explored in exquisite detail in our laboratories. They showed Itokawa is related to a specific class of meteorite (a piece of rock that falls to Earth from space) called the LL chondrites.

These meteorites are indeed rich in ferromagnesian minerals, and many other characteristics of their chemistry closely matched the particles brought back by Hayabusa from Itokawa.

The ingredients of life?

So what exactly will Ryugu turn out to be? Based on its spectrum of reflected light, Ryugu is a C-type asteroid. The closest match we have from our meteorite collections is a relatively rare group of meteorites called carbonaceous chondrites. 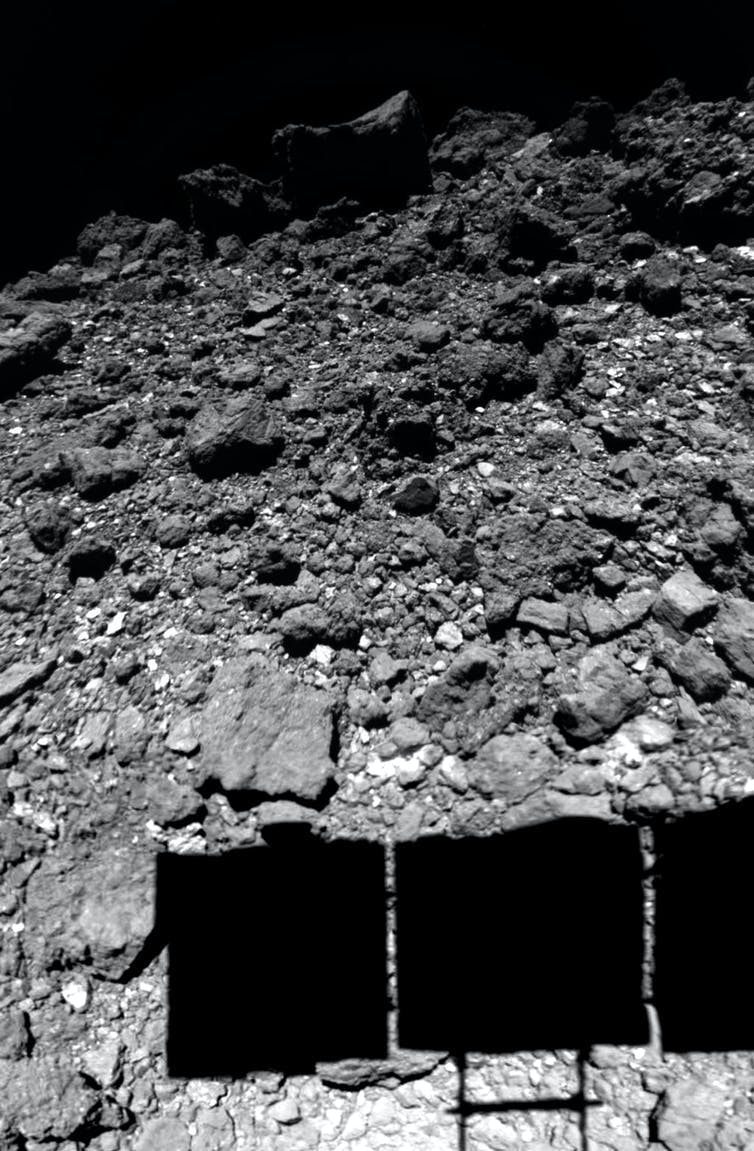 These meteorites are uncommon, but they are perhaps the most intriguing of all. They contain organic molecules and large amounts of water. They are potentially the carriers of the ingredients of life on Earth.

Soon after the Hayabusa2 capsule gets back, it will be returned to Tokyo and carefully opened. The images taken when the spacecraft touched down on Ryugu showed a great burst of material from the surface, so we expect a good sample.

This sample may reveal connections between the origin of life and rocky bodies such as Ryugu. The asteroid may have only formed quite recently, in terms of the 4.5 billion-year history of the Solar system, but it may hold an ingredient in the mix that came to be our habitable Earth.

Across the Solar system

Some time on Sunday, you are likely to see video of a fireball that is the tiny space capsule returning to Earth after six years orbiting the Sun. Hayabusa2 left Earth to travel around the Solar system to land on a rocky body less than a kilometre across.

Having kissed the asteroid, it has returned, targeting our backyard in Woomera. Yes, it is rocket science.

The precision and accuracy required is a testament to JAXA and the project team members. The spacecraft was on the other side of the Solar system during sampling, which meant signals to and from mission control on Earth took 17 minutes to travel each way.

The view from Hayabusa2 as it approached asteroid Ryugu, collected a sample, and departed.

Once we have the capsule, the sample science mission can begin. A full retinue of the best analytical techniques available in the world, including our own cosmo-chemical laboratories in Australia, will be brought to bear on the samples.

But that’s not the end of the Hayabusa2 spacecraft. The original Hayabusa had a spectacular arrival (and demise) at Woomera in 2010, because the released space capsule was accompanied by the re-entry of the mothership. 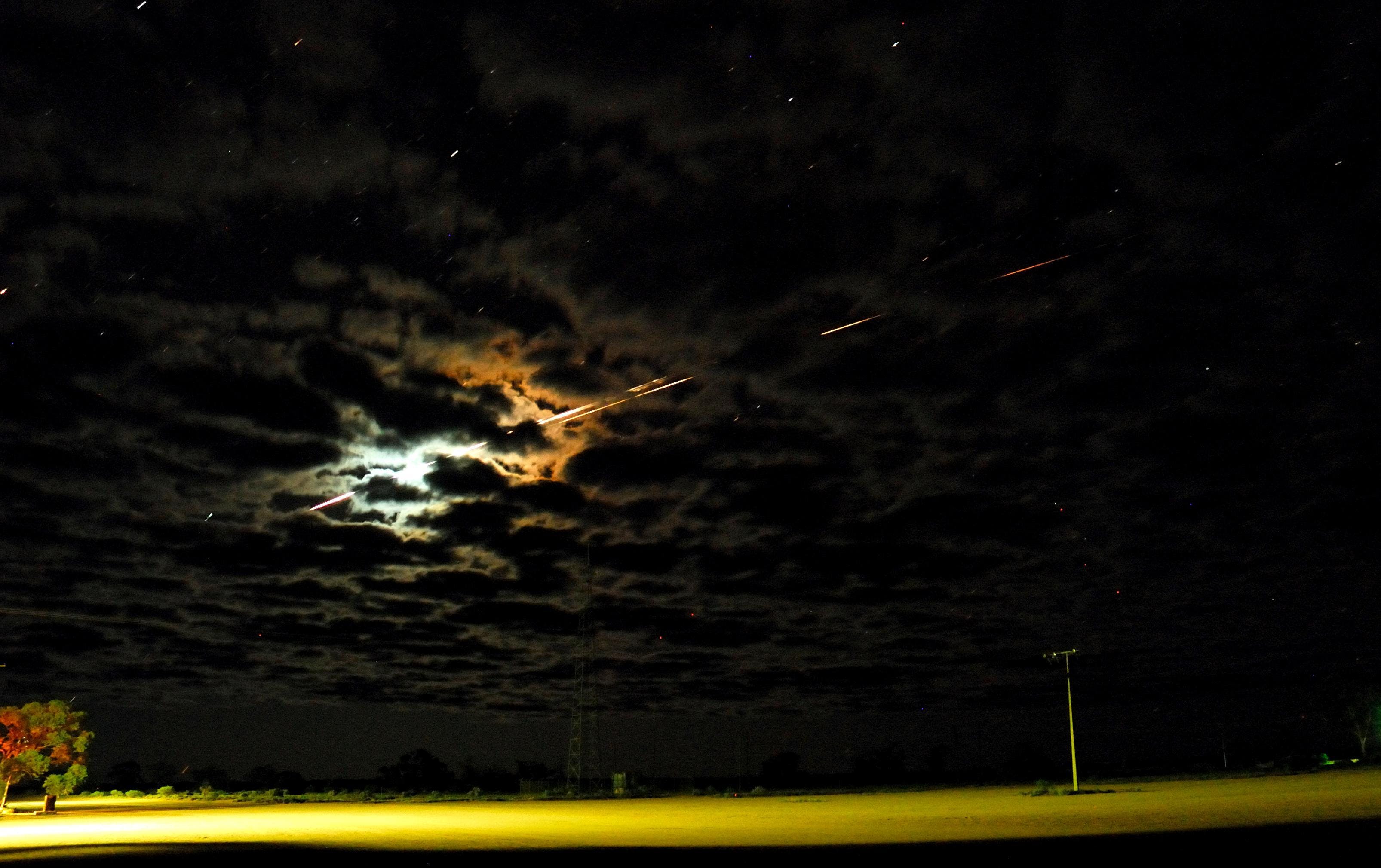 The spectacular re-entry of the first Hayabusa spacecraft in 2010. NASA / Ed Schilling

This time the plan is for Hayabusa2 to drop its sample capsule and then deflect away from Earth to carry on its mission, visiting maybe two more asteroids in its ongoing journey through space. Unfortunately, it isn’t equipped to collect any more samples, but it will give us more family photos of the small rocky bodies lurking close to Earth, shedding material we see as meteorites.

This article is republished from The Conversation under a Creative Commons license. Read the original article.